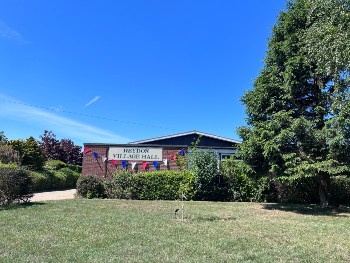 The village hall is a popular hub of our community with many local events taking place there, including elections, Parish Council meetings as well as many sporting and leisure activities and fundraising events. The village hall is located on Lowestoft Road (by the junction at Covert Road - IP18 6RF).

The hall is managed by a management Committee who meet throughout the year and aim to ensure the hall is maintained to a high standard. In late 2018, a hearing loop was installed in the hall.

If you have any queries or booking enquiries please contact Anita Freeman by email at h_freeman1@sky.com

At the end of the Second World War a fund for returning service men was set up in many towns and villages across the country.Reydon decided that, instead of making individual gifts to the returning men, a lasting legacy for the benefit of all would be to provide a new Village Hall.

A committee was formed to pursue this objective. The proposed site for the hall was on Lowestoft Road, on land at present occupied by allotments, and was generously given by Mr P.C. Loftus. A body of local individuals agreed to be Trustees, and it was decided that a management committee would control the centre's activities.

A plan for the building was drawn up and funds were raised, with many donations given. Local residents worked so hard and looked forward to the day when they would be able to use the hall. Unfortunately the whole scheme ran out of money and the scheme was abandoned.

In the 1960s a public meeting was held at Reydon High School to discuss again the possibility of a Reydon Village Hall. Everyone present was so enthusiastic, and felt there was a real need for a hall. A fund raising committee was formed and an event was planned every month. A village tote bought in regular weekly income. Residents were keen to book events in advance. This time, due to a lot of willing, hardworking Reydon people, plans were passed and the building was opened for use on April 30 1977 by Mr Simon Loftus.